Facepainting in Somerset at the Crewkerne Cots for Tots fun day. Wow… What a hot day that was. Personally, I would have to say that it was easily the hottest day of the year so far.

The Cot for Tots fun day event, organised by Nicki, started at 1pm. We set off from Bristol in plenty time, but due to a technical glitch on our journey, we arrived with just five minutes to spare. Not to worry though, with our pop-up gazebo and folding table and chairs we were set-up in no time.

Fastest queue for facepainting Ever. 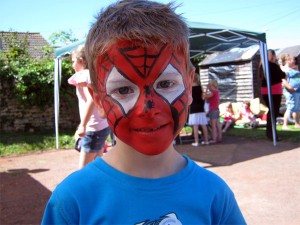 The queue for facepainting formed instantly. I mean, I don’t think I could have blinked any quicker. Kelly was just getting started when Captain Jack Sparrow came over. He was asking how many children wanted a Pirate facepainting. I’m guessing he was attending the event, looking for new recruits.

It was at that moment I realised we had forgotten to pick up new batteries for our camera. The photos in this post are courtesy of Nicki – (thanks Nicki your a star 🙂 ).

What! – No Pirate Glitter Tattoos

(No, I don’t mean illegally copied!).
A minute or two later and along came our first customer for a glitter tattoo. The young lady decided to go with a Mermaid. That being the first of many, we were soon out of the Mermaid stencil. After that, it wasn’t long before our Skull & Crossbones also run out. Unfortunately, we didn’t have any other ‘Pirate’ glitter tattoos – Sorry Captain Jack. 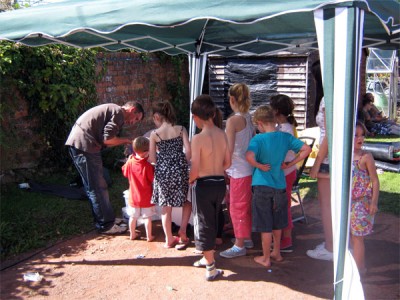 Ok, so we had ran out of two different stencils. Not very good I know. But we did have plenty of other glitter tattoos to choose from, and it’s a good job we did. Once the queue had started it just didn’t stop, as fast as I finished with one happy customer, two more joined the queue.

It was the same for the face painting, the queues seemed never ending. Of course we didn’t mind, especially since we were helping to raise money for the Cots for Tots Appeal.

At this point I would just like to say a big Thank You to all the girls and boys for being so well behaved. There was no pushing and shoving at all which made our job so much easier.

After about 4 1/2 hours of non-stop facepainting, sadly the face paint had gone all mushy, melting in the baking heat. By then though Kelly had face painted almost every child there – She even did one of the sumo wrestlers as a guaishia girl. Seeing I still had the queue of eager customers pictured above, she decided to pack up the paint and help me with the glitter tattoos. As it turned out, most of them were back for a second tat (I got the impression they liked them 🙂 ).

All in all it was a fantastic event and everybody surely had a great time. Nicki, you should be proud..!!! – It would be our pleasure to attend your next one.